This past Sunday was my birthday. It was exciting Jake was home, but I had to work an 11 hour shift. So the celebration had to wait. Jake was planning a surprise for me and kept me guessing until I was finally off from work on Wednesday. I still had no idea until we were on our way. He had me grab the GPS out of the glove compartment and in there was a book Basic Aerobatics. We were on our way to my first aerobatics lesson!

We spent the entire car ride going over different maneuvers and how to do them so I would be prepared. By the time we arrived, I have to admit, I was a bit nervous. I’ve always been afraid of spins, which sometimes made me nervous about stalls. For a long time now, I wanted to work on them so I would be less afraid. My other nervousness was about getting sick. I’ve never experienced air sickness, but this very well could have been the time I would. 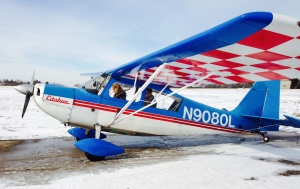 It was the perfect day for a lesson! Blue skies and light winds. The airfield is a grass strip, it was still covered in some snow, but the runway was pretty clear. We went into the office and I filled out some paperwork since I plan on flying there more often now. It was around 1:30pm and my lesson was at 2pm so we went exploring the field. Two Piper Cubs were working on their landings, the planes outside of hangars were frosted over, and we found a pretty sweet Beech 12.

When 2pm finally hit, I met my instructor who was quite awesome. Jake approved of him and I approved of him, which sometimes is rare since he always wants me to be pushed more and I like a more relaxed instructor.

I got all buckled into my parachute and two seat belts. It felt like I had 6 inches of belts on top of me. I taxied to the runway, much more difficult on a grass field covered in snow! He took off since we were focusing more on aerobatics not tailwheel endorsement. I was so happy to back in the air! A bit out of practice though.

I was grateful we just did some turns to start out to get me used to the aircraft. They steadily got steeper and steeper and before I knew it we were way more than 60 degrees of bank (no attitude indicator to tell though) it looks and felt close to 90 degrees though.

Next was going into slow flight and stalling the aircraft. It was easy to stall and I wasn’t nervous about it at all. After I stalled it a few times, then it was stall it and keep it stalled. Whaaat? That was a new experience. The airplane became very “mushy” but I could somewhat control it. It took a lot more back pressure to keep it stalled than I would’ve thought.

Spins were up next. My instructor demonstrated them first. I survived! Looking straight at the ground is an odd experience but that was about it. I did it a few times and it was no big deal! One time I let the airplane fall out of the spin before it completed one turn, the next time I kept it in the spin for more than one turn. The airplane gains airspeed pretty quickly in a spin. Who knew that spinning the airplane was fun? All my nervousness was gone about spins.

After I was comfortable doing spins to the left and right, we moved onto loops. First, the nose had to point down to gain a speed of 130kts, then straight up! You quickly see only blue and have to look outside to the left to just your position based off the wing. Once over the top of the loop, you still have to pull back. Not until you’re level again you push the stick forward. The weirdest thing about a loop is the delayed reaction you feel. You don’t feel the Gs go up until after you think you will and the engine doesn’t give the extra power until you’re done with the maneuver. I think mine were more of an elliptical shape than a loop.

Hammerheads were next. They were a lot of fun! Again build up speed, go vertical, but this time you have to stay vertical and the plane wants to flip back over on itself so it requires forward pressure on the stick. Right as the airspeed runs out you do full left rudder and right aileron. It won’t spin actually, but just rotate around the cockpit and go into a dive. The hardest part of this maneuver is keeping the plane vertical while it runs out of airspeed.

Lastly, we covered Immelman’s which is really just half a loop and half a slow roll together. This was the only maneuver which I was pull out of my seat when upside down. It made adding in the rudder difficult since I was falling out of my seat and couldn’t reach the rudder to do full deflection. I’ll have to buckle myself in tighter next time. This was the most difficult maneuver we did, it was also at the end so I was getting a bit burnt out.

We came back to the airfield, I did most of the landing but he helped. I came in a bit too fast and floated a lot. Definitely forgot how to land without flaps!

I scheduled another lesson, but just to work towards my tailwheel endorsement in a Piper Cub next week! I cannot wait! I have to work on reading Stick and Rudder. Once I get that then I’ll continue to work on my aerobatics! Video of the lesson to come shortly!

A Year in Review

2014 was a life changing year for me. I began the year working in theater and major sporting events in New York City and ended it working for a private jet company in Ohio. I didn’t fly as much as I would have liked, and some goals weren’t achieved, but I successfully made it through a huge career change, got healthier and lost 22lbs (which is quite amazing for someone who has zero willpower concerning chocolate).

I started out the year working for NHL Stadium Series, which has to be one of the most amazing experiences of my life. I loved it and was asked to do the Winter Classic this year and sad I couldn’t accept. I really do love working on major events, but knew I couldn’t make it my lifestyle since it involves working for weeks long hours without a day off and that’s not what I wanted. I need a job where I can have a life outside of it as well. 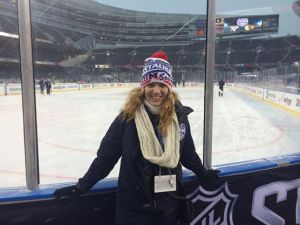 After that I transitioned into full gear study mode for my dispatch course, while slowing down my work but still a lot. I was helping out with 3 Broadway show openings and then took up a show as well. Luckily, the subway ride gave me time to study, something I miss now having to drive everywhere! It was great to finally get to work Broadway stuff, kind of a career dream come true (almost). But don’t think I wasn’t excited to hit the books and learn all about turbine systems on my down time.

I set off in June to my 6-day residency in Ohio. Finally, putting all my studying to work. Jake was a great influence on me and told me I needed to show up to the class all ready to pass. It was just a review. Having that in mind, it made the class less stressful for me and I passed and got my FAA Aircraft Dispatcher Certificate! 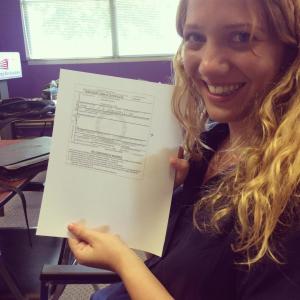 Two weeks later, I was hired by a Part 135 company and had to move away from NYC and start in just 2 weeks. I have to say those were the most stressful weeks of my life! Note to self: I’ll never say I can do that in 2 weeks again.

I adapted pretty well to all the changes and enjoyed my training and getting to see Kentucky and Ohio. I was ready for a break from NYC for awhile at least. Jake even got hired by the same company and now we’re co-workers. It can be a bit weird at times, especially since the pilots don’t really like my department and everyone in the OCC seems to hate pilots at times. But I enjoy getting to be around the pretty awesome Citation Excel when I drop him off at work!

Outside of that job, I started to take up gliding and earn my glider add-on. The weather wasn’t very cooperative so far this winter, so hoping that quickly changes in the next few months. I also got hired to also instruct at the school where I got my dispatch license. I love teaching! I wish I could do it more!

The holidays are considered the busy season. Unlike an airline, when people want to go, we fit them into the schedule so we had TONS of trips and had to make them work. It’s coming to a close now (just have to make it through this weekend!) and I can’t wait for that! We did have time to go to the Christmas party where Santa arrived in a Citation Excel!

2015 is already shaping up to be a great year! I’ll post my Goals for 2015 (maybe I’ll make them more achievable this year!) shortly. And I PROMISE to write more with updates and more aviation articles! Happy New Year!